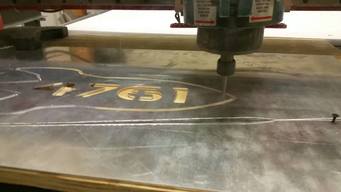 FRC Team 4761, “The Robockets” assembled in 2012 to support students emerging from FLL (First Lego League) programs as they entered Reading Memorial High School.  The Ultimate Ascent game challenge was our team’s first season. The team, comprised of 18 students and 5 mentors with no funding, competed in the Boston Regional event. As Rookie All-Stars, we also qualified and attended the World Championships in St. Louis.

In 2014, with limited funding, expenses from the previous season, and restricted space, we managed to solicit sponsors, establish a budget, and win the Rhode Island District championships. In 2015, capitalizing on this growth, our team hosted the North Shore District Event.

The astonishing growth of the Robockets was manifested in 2016 when the team was awarded the Chairman’s award, as one of the youngest teams to ever do so in FIRST. In 2016, the team also began hosting an annual Science Expo in the local town of Reading to encourage interest in STEM in the community.

During the past 2 seasons, the team has continued to grow and develop. We have hosted the North Shore District Event for both of the last two seasons, as well as winning the Entrepreneurship Award in both. In 2017, our team also won the North Shore District Event. For the 2019 season, we are once again hosting the event, and are hoping to succeed throughout the season.